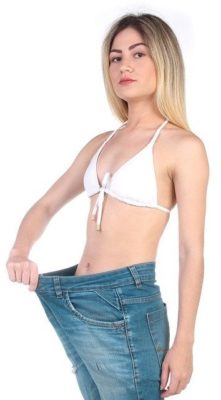 If you’re interested in knowing how to achieve healthy weight loss, you sure are not alone. In today’s world, everything seems to center on our appearance. How we look on dating apps, how we look on social media, how we look in FaceTime and such video calls… this has taken over the nation. And of course a big part of this is the size of our bodies.

Yet at the same time, the majority of people in the US, and in the whole of the developed world, are overweight. A big proportion are obese. So it’s not surprising that there’s a whole industry suriviving off of telling people how to lose weight. Some of their advice is good… and some is not so good.

So before you leap in and pay for the next crazy crash diet plan, stop a moment and consider whether the way you plan to lose weight is actually healthy. Because if not, you could just end up being thin and sick. Or worse, you could be propelled into a massive binge that would make you bigger than you are now, and sick too.

What you need to know is all the secrets to healthy weight loss.

The first point is: don’t stop eating. Don’t try to skip meals or reduce calories to the extent that you are trying to live on a lettuce leaf and half of a tomato for lunch. Seriously, there are people who do this, and when they persist they usually fall into an eating disorder.

If you are overweight right now, you may think – “Eating disorder? Cool, just what I need.” But aside from the possibility of it killing you, eating disorders don’t necessarily mean anorexia. You could develop binge eating disorder, where people starve themselves for a while and then eat a huge amount of junk food. Usually this means they consume MORE calories than if they hadn’t tried to restrict their diet at all. So you probably won’t lose weight. More likely you’ll gain.

Binge eating disorder (BED) is a lot more common in the population than anorexia. According to the National Eating Disorders Association, more Americans have BED than anorexia and bulimia combined.

This is the biggie, the major secret to healthy weight loss… but not so much of a secret really. You probably know it already. What you need to do is believe it and go for it.

It consists of three lists:

List 1 – Eat As Much As You Want of These

All fresh vegetables, raw or cooked without sugar, including potatoes and beans, but make sure you have some greens at least once a day

All fresh fruit, eaten raw or lightly cooked, without sugar or other sweeteners

All lean meats – cut off visible fats before cooking

All herbs and spices, vinegar

Tea, coffee, herbal teas with no sugar and only low-fat milk

This site uses Akismet to reduce spam. Learn how your comment data is processed.